Since 2014, Urvashi has been exploring the world of music videos making a niche for herself. With the likes of ‘Teri Load Ve’, ‘Woh Chaand Kaha Se Laogi’, and ‘Ek Ladki Bheegi Bhaagi Si’ under her belt, ‘Doob Gaye‘ a special romantic music video has been shot in picturesque Goa.

The song has been penned by Jaani, music by B.Praak and choreographed by Remo D’souza. Excited about her latest venture, beautiful and talented Urvashi Rautela has been sharing stills and clips from the shoot. From wearing a pink salmon corset dress on one to another one in a black-flowing dress twinning with her co-star Guru Randhawa with the picturesque azure sea in the backdrop has everyone asking for more.

Urvashi recently uploaded an adorable video on Instagram showcasing her make-up skills on the singer Guru Randhawa. Being the gentleman that Guru is, he is seen happily obliging Urvashi in the short clip. Both the stars are seen goofing around and their fans can’t seem to get enough of their endearing act.

Talking to Newspost from Dubai, Guru Radhawa had this to say, “Doob Gaye is close to my heart. It was magical shooting in scenic Goa. It was a delight working for T-series under the guidance of Bhushan sir. The entire has put in a lot of hard work and we can only hope that our fans enjoy this romantic number as much as we enjoyed shooting for it.“

Soothing and romantic from the look of it, the video seems to be the perfect recipe of being a hit romantic number that will definitely resound with their fans. 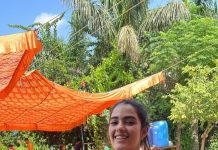